Ascension of the Lord Jesus 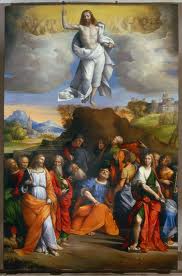 Then he led them out as far as Bethany, and, lifting up his hands, he blessed them. While he was blessing them, he withdrew from them and was carried up into heaven. (Luke 24 :50-51)

The Ascension of the Lord Jesus brings to a close His incarnate life on earth begun at Bethlehem and  completed on Calvary when He was 33 years of age.

By His Life, Death and Resurrection , He accomplished the Salvation of mankind and left our Holy Mother the Church and our Holy Father the Pope ( Peter and his successors) illuminated by the Holy Spirit, to continue on the work of salvation till the end of time.

During the interval of the 40 days  following His Resurrection, He moved among His apostles and disciples in His Glorified Body eating and drinking with them and inviting them to touch Him to assure them that He was not a ghost  but living in a glorified body.

A state which they and all of us will inherit if we love Him and keep His commandments .

The ascension of the Lord Jesus took place on the plateau of the Mount of Olives on the way to Bethany and close to Bethpage where the Lord Jesus mounted the donkey to begin his triumphal journey into Jerusalem on Palm Sunday.

The traditional site of the Ascension is marked today by a mosque in which , on a piece of marble , can be seen a clear image of a footprint said to have been left by the Lord Jesus as He ascended to His Father.

Christians are allowed to celebrate Mass there on the Feast.

As He ascended into Heaven ‘a cloud’ took Him from their sights  Acts 1:9 and as they watched , riveted to the ground , two men addressed them and asked them why they were looking up to heaven.. They said,

“Men of Galilee, why do you stand looking up toward heaven? This Jesus, who has been taken up from you into heaven, will come in the same way as you saw him go into heaven.” Acts 1:11

This helps us to realize that Jesus will come again at the end of time not as a Saviour but as a Judge. The Lord Jesus  as done His best for us, and he expects us to do the same for Him, for which we will receive an eternal reward.