5. The prayer of praise 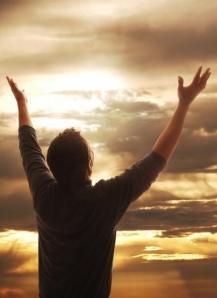 Prayer does not need many words , as Jesus himself said ( Mt 6:7 ), but once we reach the inner silence and contact with God , we begin to perceive his greatness and holiness. By contrast, at the same time we feel our smallness of limited creatures and then the eyes of our soul are enchanted before Him and come into the prayer of praise . Praise is the basis of Christian spirituality . In his letter to the Christians in Rome (Romans 1:18-22  ) S. Paul explains with admirable simplicity of its essence:

18 For the wrath of God is revealed from heaven against all ungodliness and wickedness of those who by their wickedness suppress the truth. 19 For what can be known about God is plain to them, because God has shown it to them. 20 Ever since the creation of the world his eternal power and divine nature, invisible though they are, have been understood and seen through the things he has made. So they are without excuse; 21 for though they knew God, they did not honor him as God or give thanks to him, but they became futile in their thinking, and their senseless minds were darkened. 22 Claiming to be wise, they became fools

For Paul , then, the multiplicity of sins can be summarized in one basic attitude : the lack of praise, that is the failure to recognize God for who He is. To praise God is to recognize Him for Who He is  in His  immensity , in His holiness , in His unique superiority . Well  understood  the saints . Augustine comments :

Do not think you can sufficiently praise the One whose greatness is infinite as He is without end, so praise must be endless .

St. Francis began his Canticle of the Sun with a deep praise :

Most High, all-powerful, all-good Lord, All praise is Yours, all glory, all honour and all blessings. To you alone, Most High, do they belong, and no mortal lips are worthy to pronounce Your Name (continued)