The young and the poisons of the world 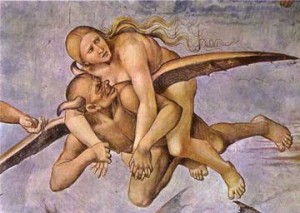 When I started writing the book “How Satan corrupts the society” did not think to find so degraded youth. For this reason, get to the end of the book was a torture for me.Television, internet, magazines, comics, cartoons, discos, singers … they are mostly negative. Not everyone or everything, this is understood, but many of them launch  deleterious messages to our youth.Singers like Lady Gaga, Madonna, Eminem, point of reference for many young people not only lead a wild life, but make great display  of it both in interviews and in songs.The  Fabri Fibra( Italian singer) titled ‘’ There are a hundred ways to die’’, says: “There are a hundred ways to die, all work (…). The best way to die is with the drug, a combination of pills, heroin and other stuff. ” And at the end of the song you hear a gun shot showing  that he committed suicide.The lyrics of Lady Gaga but do not have a logical meaning, but her videos are full of strange symbols. Of course that is targeted, more often, are the Catholic symbols. So when did Veronica Ciccone( in art Madonna), during a musical performance, with a crown of thorns was made to hoist on a cross made of precious Swarovski, and so did Lady Gaga when  in the video Alejandro dressed as a nun swallows a rosary.

One of the cornerstones of the singers loved and venerated by the  young generation is catholic is blasphemy. But there are other points still present in many songs: drugs, alcohol, sex, violence, incitement to suicide and murder. All issues which are also found in some video games, TV series, and reality.

About singers, gladly quote Vasco Rossi, the Italian singer beloved and revered by thousands of young people. For many years ahead of the curve, Vasco Rossi, in one of his hits  says: “We’re just us going to bed early and wake up with headaches (…) we do not have a regular life that we do not know limit, just us … then those who die early, however, is the same (…) that we have nothing to say we just throw up. “The Blasco  is not afraid to inject the poison  of the meaninglessness of life, both he, as he said in one of his latest songs titled Futurist Manifesto of the new humanity no longer has faith, and therefore for him “the simplest thing would be not never been born. “But Vasco does not stop here and with the advent of Fb loves externalize the most diverse opinions to his countless fans. We read what he writes about accidents caused by drunk driving:”I will not argue here that to drive a bit ‘tipsy is a good idea, but just try to better reflect on this issue … We always try a cause, we always need to find a reason: it is a purely human characteristic! But, unfortunately, the truth is that often the accidents and misfortunes have no rational reason, are an integral part of life, including the existence in the package: just happen! Persist in seeking a cause, a reason, a reason … and, let’s face it: to punish the guilty …!. (…) Absolutely do not want to offend the sensibilities and feelings of all those who have had a relative involved in a fatal traffic accident: are trauma and suffering in the face of which there are no excuses or explanations that are valid or that they mean something! Nevertheless, the issue is complex, and must be addressed point by point in a rational way … Designed and re-thought. “I’d like things to think about a fatal accident caused by a drunk who is driving?!?But today the world goes in this way : if you’re famous you can say whatever you want, so you will be praised, heard, imitated.And one of the most frequent imitations about sex. Eroticism is everywhere , is everywhere. In television, the Internet, in the lyrics, comics, magazines, etc … Today there is a bombing true for young people to lose their first purity. Taken that, in some cases, it is a descent to the worst instincts.It has lost much of youthful beauty. Too bad, because the youth are the future. What future can there be if this generation already at 11 years is beginning to make use of joints, alcohol, cocaine? What future if 8 years begin to have problems with anorexia and bulimia? What is the future if the suicide, even if newspapers do not mention it, are still rising?Do not underestimate the power of the media! Not  to defuse  these words because they make us afraid. Do not abandon the young people  by themselves, but roll up our sleeves to give our young people a future. We fight against the media system, against the junk programs, against obscenity and singers who give bad examples. Get out your head and say: enough! We must do this for our kids for their future, for their eternal life.