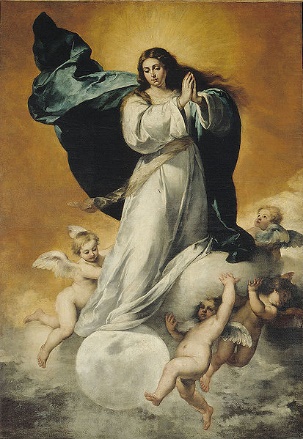 The feast of the “Immaculate Conception is celebrated on the ‘December 8 and derives from the Feast of the Holy and the Most Pure Mother of God celebrated since the fifth century in Syria.

Over the centuries, this devotion and spread across Europe with the proclamation of the dogma by Pope Pius IX in Part 1854.

The Dogma of the Immaculate Conception is  the essence of grace and purity of the Virgin mary conceived without  original sin . The dogma states : “that the most Blessed Virgin Mary, in the first instance of her conception, by a singular grace and privilege granted by Almighty God, in view of the merits of Jesus Christ, the Saviour of the human race, was preserved free from all stain of original sin.” Encyclical Ineffabilis Deus of Pope Pius ix

To become the mother of the Savior, Mary “was enriched by God with gifts appropriate to such a role.” The angel Gabriel at the moment of the annunciation salutes her as “full of grace”. In fact, in order for Mary to be able to give the free assent of her faith to the announcement of her vocation, it was necessary that she be wholly borne by God’s grace.

The “splendor of an entirely unique holiness” by which Mary is “enriched from the first instant of her conception” comes wholly from Christ: she is “redeemed, in a more exalted fashion, by reason of the merits of her Son”.

The Father blessed Mary more than any other created person “in Christ with every spiritual blessing in the heavenly places” and chose her “in Christ before the foundation of the world, to be holy and blameless before him in love”.137

The Fathers of the Eastern tradition call the Mother of God “the All-Holy” , and celebrate her as “free from any stain of sin, as though fashioned by the Holy Spirit and formed as a new creature”. By the grace of God Mary remained free of every personal sin her whole life long. 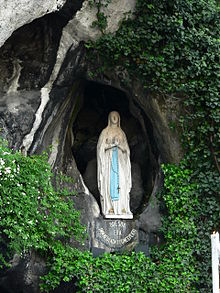 During the ‘apparition to Bernadette on March 25 in Lourdes, 1858, the Virgin Mary introduced Herself as the Immaculate Conception was a great test for small  illiterate visionary  who could not know the dogmatic statement released 4 years earlier.

Let us pray to Mother Mary  that  Her  purity may  be reflected on our hearts, Queen of Peace, pray for us!