HISTORY OF THE ROSARY 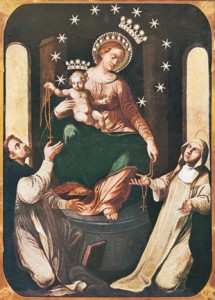 Since the earliest days of the Church , Mary was associated with Jesus in the love of Christians and the prayer of the faithful and , slowly, over the centuries , has been forming the prayer that is at the foundation of holy Rosary, the ‘ Hail Mary . As early as the third century seems that Christians would address to Mary using the words used by  Archangel Gabriel addressing  the Virgin at the Annunciation : “Hail Mary , full of grace ! “

In the eighth century was added to the Angel’s greeting the exclamation of Elizabeth, during the visitation : ” Blessed are you among women and blessed is the fruit of your womb .”

In the thirteenth century the  mystic Gertrude added the name of Jesus at the end of ‘ ” Ave Maria “: ” Blessed is the fruit of thy womb , Jesus.”

At the end of the fifteenth century appeared the formula: “Holy Mary, Mother of God , pray for us sinners.”

The term “rosary” comes from the Latin rosarium, ” rose bush ” , and , from the thirteenth century , was used to indicate the prayers that form as a ” crown” of roses to Our Lady ( Latin : crown , or garland ) .

At the origin of the Rosary  there are the 150 Psalms of David  recited in the monasteries during the span of the weekly prayer . To obviate the difficulty to memorize all the Psalms outside of the religious centers , an Irish monk  in 850 , proposed to replace them with the recitation of 150 ” Our Father.” To count the prayers they used stones, then cords with 50 or 150 knots.

In the thirteenth century the Cistercian monks developed the new form of prayer called the “rosary” , similar to the present , because  they compared it to a mystical crown of roses donated to Our Lady. It is a devotional prayer and contemplation, that begun to spread out by  the Order of Preachers , founded by St. Dominic, and, subsequently, the Confraternity of the Holy Rosary , founded by St. Peter of Verona, a Dominican .

It is said that it was  our Lady  , in an appearance to  San Domenico , to give him the rosary as a remedy for the Christians against heresies. In the Renaissance , precisely in 1521 , there was instead the final form of the Holy Rosary. This prayer today consists of five series of ten ” Hail Marys ” , preceded by an “Our Father” , each united with meditation on the “mysteries ” ( significant moments in the life of Christ and Mary ), collected in ” the joyful, sorrowful, glorious “. 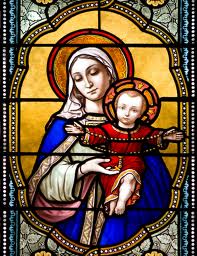 The full version of meditation included the fifteen mysteries of contemplation , for a total of 150 ” Hail Marys ” ( by analogy , of course, with the 150 Psalms of the Psalter ) . In 2002 was added to the meditation of five “mysteries” , called ” of the light ” , by John Paul II , thus reaching a total of 200 ” Hail Marys .” The counting  is held by sliding your fingers between the grains of the “crown ” .

The Rosary was approved on behalf of the Pope, Cardinal Alessandro Nanni Malatesta , but the first Pope of the Rosary was Pius V, of Dominican formation , in 1569 described the fruits that St. Dominic gathered with this prayer and invited all the Christians to use it. Leone XIII , with its 12 encyclicals on the rosary , was the second Pope of the Rosary.

John Paul II wrote the Apostolic Letter Rosarium Virginis Mariae, explaining the actuality of our prayer of  the Holy  Rosary , its importance in the lives of the faithful , as ” it concentrates in itself the depth of the Gospel message , which is a compendium .”

From 1478 to date , there are over 200 papal documents on the rosary. In most apparitions, Our Lady herself has indicated the Rosary the most necessary prayer  for the good of humanity. At the apparition in Lourdes in 1858, the Virgin had a long rosary in her arm. In 1917 at Fatima and more recently   in Medjugorje , Our Lady urged to pray the Rosary every day , linking  it to  several promises ; among those  the most beautiful are:

<< Those who serve me constantly by reciting the Rosary will receive some special grace; The Rosary shall be a powerful weapon against hell, it will eliminate vices, deliver from sin and  destroy the heresies ; will bloom again the virtues and holy works , will obtain for souls abundant mercies of God . ; the soul that trusts in Me with the Rosary, shall not perish; the true children of my Rosary will enjoy great glory in Heaven; I free every day from purgatory the souls devoted to my Rosary; whatever you ask of the Rosary you’ll get it. >>

Great miracles were attributed to the recitation of the Rosary throughout history: remember the “Victory of Lepanto” in 1571, which stopped the Turkish advance by sea,nattributed to the Virgin Mary by Pope Pius V, and the subsequent establishment of the Feast of Our Lady of the Rosary, in his honor. Even the “Battle of Vienna” in 1683, which stopped the Turks by land, was a grace of Mary. After this battle Pope Innocent XI instituted the Feast of the Holy Name of Mary, fixed until 12 September.

The ‘ Saints of the Rosary’ 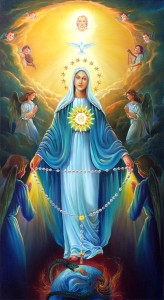 Among the figures of holy men and women of the past centuries , stands out among all the love P. Pio Petralcina with the love he had for the Virgin Mary. Celebrating the Holy  Mass at 4 in the morning , he used to prepare for it by reciting several rosaries ; also did in the time of thanksgiving, after the celebration . Questioned one day on the number of crowns that he recited daily , he replied that there were more than a hundred. Faced with the astonishment of those who heard, P. Pio  felt  himself amazed by the fact that the listeners didn’t  not do the same.

Another example of a holy priest , apostle of the Rosary , is John Baptist de La Salle, called the Priest of the Rosary, for the sleepless activity of the Rosary in his hands. St. Louis de Montfort said that ” a priest who says and preaches the Rosary get more fruits in a month than others in a year.”

Of the Curé of Ars , an apostle of the confessional , it was said that << his lips were constantly moving >> . The Rosary was his chain of grace  for himself and for the people being confessed. That great and whimsical Saint  in Rome, Filippo Neri  , had for  the Rosary an affection equal to the extraordinary love he had for the Virgin Mary. If  questioned on a religious practice to do , he would reply without hesitation : << Recite the Rosary devoutly and often >>

<< Bernadette does nothing but pray…. sliding  the beads of the Rosary … >> . So the sister : Tonietta said about the  humble visionary of Lourdes , who had the privilege of praying the rosary under the gaze of the Immaculate Conception , while She was  herself sliding the crown between Her fingers.

We also think of St. Catherine Laboure , who received the gift of the Miraculous Medal << >> . From the point of death he exhorted the sisters ” to recite the Rosary and recite it always good.”

St. Joan of Arc gave the same reply to  the king that  inquired ” about what he was dreaming ” as he rode the horse  all absorbed : << Dear King   I’m praying the Rosary  >>.

LEARNING FROM THE SAINTS

Praying the Rosary is like to welcome Our Lady in us, making her come to dwell in our poor person. As St. John the Evangelist, the beloved apostle of Jesus, who welcomed  Mary in his home (Jn 19:27), we are invited from those who preceded us to become pure in heart and burning with love for Her.

Then we welcome the invitation of St. Bernadette who recommended us this secret …:

<< In the evening, when you go to sleep, take the crown; fall asleep playing it, you will do as well as those children who fall asleep, calling his voice growing fainter: Mom … Mom >>.

We love these Saints …!