Our Lady of Guadalupe

“Am I not here who am your Mother?” (Our Lady of Guadalupe to Juan Diego) 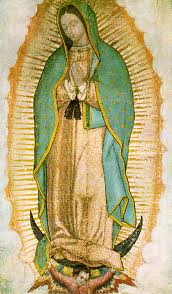 In Latin America we have a wonderful grace: the presence of our heavenly Mother, in a very beautiful invocation, the presence of Mary with the color of the skin like many women in Latin America, with the tenderness of a mother who is pregnant and who is down from heaven to join us through the story and stay with us for ever: Santa Maria de Guadalupe.

God chose the place and time. It was the year 1531 in Mexico, when America was in a very difficult time with the arrival of the Spanish in our continent. All started in Mexico, as in the rest of America, the Catholic doctrine was never very full of love and understanding for the Indians, it was obvious discrimination and harsh treatment against them. However, the love of God and ‘expressed gloryfully the first day of December of the same year. One of the many men who lived in that area, a simple man named Juan Diego, who was a native, lived the great meeting that would change his life and faith of millions of men and women. Juan Diego was walking next to a hill called Tepeyac, then  heard ‘a sweet voice calling him by name:

“Juanito, the most humble of my sons, where are you going?”. Climbed  on the top of the hill and when he arrived, he  admired’ a beautiful woman clothed with the sun, who asked him to come closet o her.

“I am the ever Virgin Mary, Mother of the True God for whom we live. Mostly I want to build a temple to show my son and to give to all men who seek after me. ‘Cause I am your merciful mother, you have to fulfill my dream to go to the palace of the Bishop of Mexico and tell him personally, that I am the Mother of God and I sent you. ”

On Sunday, after Mass, Juan Diego returned to the bishop’s palace. In this second time, the bishop asked him many things to be  sure She was the Mother of God, and especially asked for a sign as proof that She was really the Virgin Mary. But it happened that Juan Diego’s uncle became seriously ill and had to take care of him. until Tuesday, December 12, when, going down the hill to find a priest to confess his uncle, the Virgin Mary appeared to him again. With a voice full of love, as only a mother can talk to a child who is worried, reassured him and told him that his uncle was already ‘healed. “Listen to Juan Diego, put it in your heart. I’m not here who am your Mother? Are you not under my shadow and protection? I am not the source of your joy? Our Lady then asked him to climb to the top of the hill to cut some roses and put them on her mantle.

Juan Diego knew at that time of year that would not have been possible to find the roses, but went ‘without fear, however, and I find’ many beautiful roses , put them in his cloak and went out to meet the Virgin Mary.

She took those in her hands and said. “These flowers are a sign to the bishop  , tell him that he needs to see my desire to build my temple And you who are my messenger, in you I put my trust.” Full of faith, Juan Diego went ‘back to the bishop and said that Our Lady had sent to bring those roses as proof that she was really the Virgin. He opened his ‘cloak, the roses fell to the ground, but did not understand the great  amazement of those who looked with attention not only roses, but directly the cloak of Juan Diego, and this seemed drawn on the fabric, the beautiful image of the Virgin of Guadalupe. 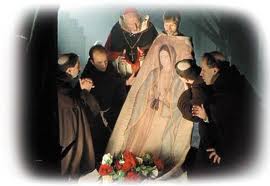 The prelate loose from the neck of Juan Diego, the cloth on which was imprinted  the ‘image of the  Holy Lady and the brought it with great devotion at the altar of the chapel. With tears of sadness  apologized for not accepting the mandate before the Virgin. The bishop moved to the Church the sacred image of the beautiful lady of the sky.

But what is the legacy of this miraculous event that  happened in America at that time? The chronicles tell us that the communication of the Virgin Mary to Juan Diego was in his dialect: the náhualtl. Then, the Holy Mother of God used the word “coatlallope” consisting of a compound noun: snake “coatl”, ie, the preposition “to” and “Llope” crush, that is defined as “one who crushes the serpent.” There  are other interpretations of the word, as the word Nahuat Spaniards have figured out how to “Guadalupe”. 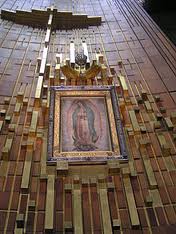 The relationship  of the Holy Mother of God, with Juan Diego was like a mother to her son, with the dignity of man and Son of God, with motherly love, her maternal evangelization has been made in understanding and closeness to a new culture emerging , carrying a message of peace and hope for humanity.

Pius X proclaimed Our Lady of Guadalupe, “Patroness of all Latin America,” Pius XI, “Of all the Americas,” Pius XII called “Empress of the Americas” and John XXIII, “The new missioner of the celestial world” and ” Mother of the Americas “. In this basilica great John Paul II beatified and then canonized Juan Diego in 2002.

Several technical studies and scientists try to unravel the mystery of Guadalupe, image rich fabric perishable because this is a fabric made of plant fibers that can not ‘be kept more than twenty years, but still-intact after centuries.

Sophisticated studies in which the results were surprising, admiration and proof of that wonderful visit us Mary did, and reminds us that the mother’s love is inexhaustible, that for her there is no distinction between his sons, that if are smaller, simpler is easier to get closer to Jesus, that when we have a little ‘fear or sadness in our hearts, She will always be close to us with her sweet voice repeating:

“Am I not here who am your Mother?” Then we take the beautiful roses that intertwine the Holy Rosary and embrace her  confidently with love.
Elisabeth Huaita