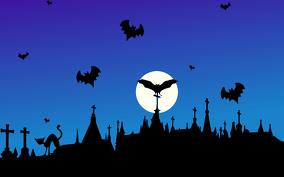 Halloween is an yearly holiday the eve before the Christian feast of All Saints.

Let’s take a closer look into the origin of this pagan feast.

Halloween has strong roots in paganism and witchcraft.  It began as the Druid festival of Samhain.  The Celts considered November 1st the day of death, because, in the Northern hemisphere, this was the beginning of winter, the leaves were falling, it was getting darker earlier, and temperatures were dropping.  They believed that their sun god was losing strength and Samhain, the lord of death, was overpowering the sun god.  The druids also taught that on 31 October, on the eve of the feast, Samhain assembled the spirits of all who had died during the previous year to return to their former home to visit the living.

On Halloween, for hundreds years, druid priests have conducted diabolical worship ceremonies in which cats, horses, sheep, oxen, human beings and other offerings were rounded up, stuffed into wicca cages and burned to death.  These human and animal sacrifices were apparently required to appease Samhain and keep the spirits from harming them. 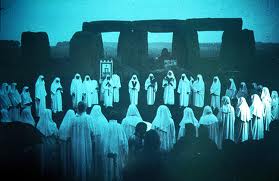 Greek and Roman writers frequently made reference to the druids as practitioners of human sacrifice, a trait they themselves reviled, believing it to be barbaric. Such reports of druidic human sacrifice are found in the works of Lucan, Julius Cesar ,Suetonius  and Cicero . Caesar claimed that the sacrifice was primarily of criminals, but at times innocents would also be used, and that they would be burned alive in a large wooden effigy, now often known as a wicker man. 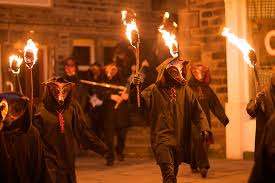 To obtain these sacrifices, druid priests would go from house to house asking for fatted calves, black sheep and human beings.

Those who gave were promised prosperity, and those who refused to give were threatened and cursed.

This is the origin of “trick or treat.” 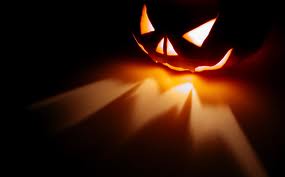 The Jack-O-Lantern has its origin in the candle-lit pumpkin or skull, which served as a signal to mark those farms and homes that supported the druids’ religion, and thus were seeking the “treat” when the terror of Halloween began.

The World Book Encyclopedia says: “The apparently harmless lighted pumpkin face of the Jack-O-Lantern is an ancient symbol of a damned soul.”

While people and animals were screaming in agony, being burnt to death, the druids and their followers would dress in costumes made of animal skins and heads.  They would dance, chant and jump through the flames in the hope of warding off evil spirits

In the lives of saints and martyrs, the druids are represented as magicians and diviners

We all know that spiritualism is an open door to the kingdom of darkness.

We know that God is Love and life and His and our enemy is the death.

The Word of God 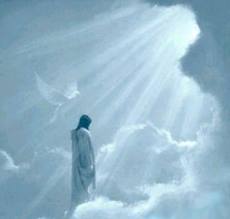 “… teach my people the difference between the holy and the unholy, and cause them to discern between the unclean and the clean.”  Ezekiel 44:23

“Let love be without hypocrisy.  Abhor what is evil.  Cling to what is good.”Romans 12:9

“Therefore, let us cast off the works of darkness, and let us put on the Armour of Light.”  Romans 13:12

WE CHOOSE JESUS, WE CHOOSE LIFE,

FEAST OF ALL SAINTS