JULY DEDICATED TO THE PRECIOUS BLOOD OF JESUS 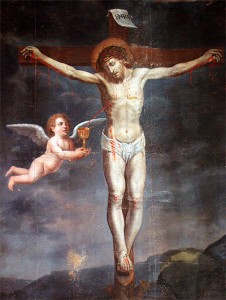 In the stories of the Institution of the Eucharist by Jesus at the Last Supper, the evangelists keep in close relation  the blood with the covenant (Mt 14:24, Mt 26:28, 1 Cor 11:25). Why do we need blood for an alliance?

Blood and Covenant in the Old Testament

In the Old Testament to the blood was given a sacred value, because the observation attested that it was linked to the life, if the blood of a living being was  poured, along with it would go away  the  breath of life . This explains the prohibition of ancient legal codes-testamentary to shed blood of  human life belonged only to God and no man could claim the right to appropriate it (Gen 4:10; Job 16:18-19). Even the meat of animals could not  be eaten along with his blood (Gen 9:4; Lv 19:26). On the other hand this also explains why the sacrifices in honor of Yahweh were made with the  killings of animals: the vital spirit they contain atoned for the vital spirit of the men (Lev 4.5 to 34, 16.14 to 19), also blood, which is life, was returned to God.  The use of expiatory sacrifices persisted to the time of Jesus in the temple of Jerusalem every day at 15 a lamb was sacrificed in expiation of sins, and especially the sacrifice acquired special significance in the party Annual Atonement.

In the period of the Old Testament animal sacrifices were also concluding  alliances, it was the custom of the nomads sign an alliance with a banquet (Gen 26:30; 31,54). The Bible relates that the same ritual is repeated during the covenant mediated by Moses on Mount Sinai: God is worshiped on the mountain with Moses and the elders, then follows a sacred banquet (Ex 24,11, watched the Lord, then they ate and drank ). Celebrate a feast in God’s presence is a sign that you are in communion with Him, and  under His protection, and the mountain, then, is presented as a relationship between the landlord and friends who invites him to eat in  his presence. The covenant at Sinai continues with the offering of the sacrifices of Moses that  builds an altar at the foot of Sinai (Ex 24.1 to 10) and with the blood of sacrificed animals sprinkled before the altar, then the people, saying: Behold the blood of the covenant, which the Lord hath contract with you with all these words. The blood in this case unites God and the people in a bond almost parental, as God purifies them and gives them a share of the life that belongs to Him.

The new and eternal covenant in the blood of Christ

In the NT it is mainly about the Eucharist which  the term ‘alliance’ is used  in relation to blood, Drink ye all because this is my blood of the covenant, which is poured out for many for the remission of sins (Mt 26:28, Mk 14, 24 cf. Lk 20:22 and 1 Cor 11:25). This phrase referring to the sacrifice of Jesus sums up all the meanings attributed to the Old Testament animal sacrifices and goes much further. The exclamation of John the Baptist, which recognizes Christ as the Lamb of God, who takes away the sin of the world (Jn 1:29), identifies Him as the sacrifice for sin in the temple. The sacrifice of Jesus also refers to the lamb of the first Passover in Egypt whose own blood, shed on the doorposts and the lintel of the houses, kept  the Angel of Death away by the people (cf. Ex 12:1 ff), and likewise the blood tears of Jesus from death those who are marked.

At the sacrifice of animals  the New Testament replaces the dedication of the life of Jesus, which establishes a new and definitive bond between man and God, so that breaks down the wall of sin purifying those who ‘are sprinkled’ (Heb 9:14) . The letter to the Hebrews defines the animal sacrifices shadow of heavenly things (Heb. 8:5) and elevates the sacrifice of Christ far above; Jesus is indeed both victim, whose blood cleanses the conscience from dead works, obtaining eternal redemption (Heb 9:12) and high priest, entered not into a sanctuary made by human hands …. but into heaven itself …. and not to offer himself again and again as the high priest enters the sanctuary every year with blood of others once … in the fullness of time, He appeared to put away sin by the sacrifice of himself (Heb. 9:24 ff).

The Eucharistic narratives then gather in themselves  the idea of ​​the covenant (for unilateral initiative of God) that the vicarious atonement, because Israel receives  the new salvation of the Lord without worthiness:  has made the death of His son Jesus the disposition of his faithful and irrevocable for Israel and for all (lit. For many, it is an open formula that stands for all men). The Eucharist is the new covenant as it is the full and final disposition of God in Jesus Christ for us. The people of Israel had failed to be faithful to any of the covenants that God in his great love had made with them (the creation, the promises to the patriarchs, the law), and the gift of the blood of Christ enables us to observe the ‘ alliance, because it gives us to live or die as  He lived and died.

In the blood of Jesus is thus accomplished in a sublime way the whole history of the Old Testament God’s covenants with his people: it is born a new people, the Church, which is no longer under the rule of law, but of the Spirit (2 Cor 3:6), and that constitues  the men children of God, not just partners in  alliance-building. We have been sanctified by the offer of the body of Christ (Heb 10:10), and this re-establishes a communion of life between us and Him (2 Cor 5:18-19). The tear in communion with God done  by men since the original sin was sewed up in Christ Jesus We were again made capable of loving God and  the neighbors.