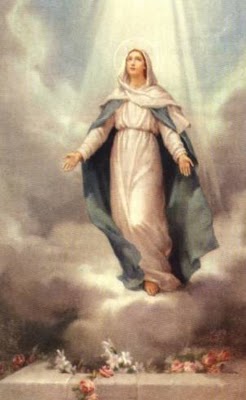 With the term “Assumption” the faith of the Church indicates the privilege of the Virgin Mary when at the ending of her  earthly life, was elevated to heavenly glory with the soul and the body. And if “the bodies of the righteous after death dissolve, and only the last day will be joining, each to its own glorious soul of this general law … God wanted to free the Blessed Virgin Mary: She was not subject to the law of remaining in the corruption the tomb, nor the waitof  the redemption of her  body at the end of the world “(Pius XII, Munificentissimus Deus).

<< In your motherhood have kept her virginity, in your Dormition you did not abandoned the world, O Mother of God, you’ve reached the Source of Life, you who conceived the living God and that by your prayers will deliver our souls from death >>.

This truth of faith was always believed and professed by the People of God, together with their pastors but was solemnly defined by the proclamation of the dogma in 1950 by Pope Pius XII.

The party is certainly of Eastern origin; the documentation to attest to Rome under Sergius I (687-701): it is likely to have been introduced by Greek monks in the 7th century.

Date back to the 10th century the first representations in Byzantine art with the representation of the “Dormition of the Virgin,” while in the West was already familiar with the iconographic type of “Mary Queen”, which will create the schema of the crowning, culminating act of transit Virgin, and ‘”Assumption” properly so called, with Mary closed in a light almond transported to heaven by angels. In the 15th century. the almond was replaced by a crown of angels in flight, the type that will then remain constant (DE STEFANO FIORES – VALERIA FERRARI SCHIEFER – SALVATORE MARIA PERRELLA, Mariology, Dictionaries St. Paul, St. Paul, Cinisello Balsamo 2009.).

The text of Scripture that overshadows the Assumption of the Virgin Mary into heaven is certainly Ap. 12, 1:

<< A great sign appeared in heaven: a woman clothed with the sun, with the moon under her feet, and upon her head a crown of twelve stars >>. In the “woman” the Church has always seen and venerated Mary, clothed in the glory of her Son. With the symbol of the sun, in fact, means “the radiance of good works.” > (Ml. 3, 20), “Christ, the Sun of Justice (Mal. 3: 20), “has delivered the robe of this glorious sun to its venerable Mother and made it bright inside with the fullness of heavenly wisdom, and the outwardly adorned with various works of virtue “(CHRISTIAN, Cistercian abbot of the twelfth century.).

The “Munificentissimus Deus” of Pius XII also appeals to Proto (Genesis 3: 15), a text that presents the “woman” closely connected with his descendant in ‘”enmity” against the serpent. As a second Eve, Mary is engaged with the Son in the fight against sin and death, which is why he bought a new relationship with life, of which the heavenly is the ultimate expression. As the glorious resurrection of Christ was an essential part and the final sign of this victory, so it was necessary that the battle faced by the Virgin with the Son would end with the glorification of her virginal body.

We conclude these brief remarks on the Assumption of Mary with a prayer addressed to her by Pope Pius XII:

<< O Immaculate Virgin, Mother of God and Mother of men, we believe with all the fervor of our faith in your triumphant assumption into heaven in body and soul, where are you Queen acclaimed by all the choirs of angels and all the hosts of saints; and we join them there to praise and bless the Lord, who has exalted above all others, and to offer you the desire of our heart and our love. We know that your look, that maternally stroked suffering humanity of Jesus on earth, in heaven is satisfied at the sight of the glorious humanity of the uncreated Wisdom, and that the joy of your soul face to face in contemplating the adorable Trinity ago startle your heart blissful tenderness; and we, poor sinners, we at which the body weighs down the flight of the soul, we ask you to purify our senses, so that we learn, even here on earth, to enjoy God, one God, in the enchantment of creatures. Amen. >>